Fat Girl Speaks founder Stacy Bias has a brand new project, Belliesarebeautiful.com, in which she encourages one and all to submit pictures of their bellies (face optional, but please make it PG-13), so we can show the world just how beautiful ALL bellies can be! W00t!

And she has asked those of us on the FatPDX mailing list to spread the word that she is organizing an upcoming Portland event to take lots of belly photos at once, and her main need right now (besides belly pictures from anyone anywhere who wants to submit them) is the money to make that event happen, even if it comes in micro-donations. Here is Stacy’s press release for the project:

BelliesAreBeautiful.com is throwing a BELLY UP event in June or July.

Four professional photographers have volunteered their time and talents to spend a day with BAB photographing your fabulous bellies for the website. All bellies of all shapes, sizes, genders, ethnicities and ages will be welcome (though underage bellies may be barred depending on venue).

There will be 4 fun photo stations (body paints to write messages on your bellies, zebra backdrop, suspenders, and feather boas for the glam sect, a mattress with pillows and fabrics of all kinds for the sensualists and an elegant b/w station for the folks who like to keep it simple!) as well as a DJ, dancing and cocktails!

I want, however, to make this event free. I know how hard it is for folks to summon up the nerve to be semi-nekked in front of a camera, so I don’t want any additional deterrents.

So I’m asking for folks to donate to the cause in advance to help me secure the venue, the props, and possibly a collection for the photographers.

Everyone who donates $5 or more will receive an “I Bellied Up at BelliesAreBeautiful.Com” Patch promptly in the mail. 🙂

Please go here to donate and see the patch: http://www.belliesarebeautiful.com/donate.html

and thank you, in advance, for your generosity!!

I am so looking forward to this! Stacy is definitely encouraging people in other cities to hold BAB picture-taking parties and events also, so if this sounds like your kind of happening and you live elsewhere, please let her know via the BAB site that you’re planning on putting something together, whether it’s as big as this or as small as two or three friends in a living room with a digital camera, or anything in between.

And Now For Something Completely Different: A Successful Dieter Without a Bone Up Her Ass

Over at Chez Kate yesterday, Ms. Harding tipped off the ‘Sphere to this freakin’ awesome op-ed in the Kansas City Star penned by Debra Sapp-Yarwood (DebraSY on Big Fat Blog). It’s called “A Few Requirements for Living a Healthy Life,” which is a mondo sucko title for this article, because it’s so not about that at all; Kate says Debra wanted them to call it “Why I Hate The Word ‘Lifestyle’ And You Should Too,” and they damn well should have.

Because Debra — wait for it! — actually lost 60 pounds and has kept them off for five years, and unlike almost every diet-troll who stops by fatblogs to drop their foul-smelling reduced-calorie turds on the readership (despite most of them not having even finished losing weight, let alone maintained the full loss for five years like Debra has), she does not credit her amazing wonderful awesomeness for having done so. Nope, she says, dumb luck of the genetic draw and socioeconomic privilege are more like it. END_OF_DOCUMENT_TOKEN_TO_BE_REPLACED

Announcement: Shapelings PDX Meetup on May 24!

Thanks to Fillyjonk over at Shapely Prose for putting up the Where In The World Are Shapelings? post last Friday, in which thread a Portland meetup was generated! I am stoked! Here are details:

Street parking only (you will need quarters for the meters). Taking mass transit is highly recommended; it’s near all the downtown bus routes (get out around Burnside) or about 6 or 7 blocks from the MAX light rail or Portland Streetcar.

No RSVP necessary, just show up if you want to — but if you have any questions feel free to post them. I’ll be re-posting the announcement closer to the date, but I wanted to put it up now in case anyone planned to come in from outside the city.

If the weather is nice, we can get our doughnuts and walk around; if not, we can huddle indoors. If you can’t or don’t want to eat doughnuts, that’s cool too; they probably won’t care if everyone orders, as long as some of us do. (Vegan doughnuts are available!)

Hope to see you there!

Poor Mr. Binkley, my poor big fat fluffmonster of a kitty. He has such a hard time reaching around to his back and flanks and between his legs, he just became covered with mats. Unlike both of his brothers, he hates to be combed (I guess I can’t blame him, given all the clumps in his coat) and I finally had to call a mobile groomer to deal with them, and Binks wound up getting sheared like a sheep. He actually seems more comfortable than when he was covered in mats, although he is seeking out warm spots more than he used to.

I actually caught myself feeling guilty at “letting” Binkley get so fat he couldn’t clean himself properly. He does weigh about 20 pounds, but I think most cat diet food is garbage, so I feed him Wellness wet food and Innova Evo Ancestral dry food, both grain-free, at the “normal size” adult cat doses (no free feeding any more), and he weighs whatever he weighs, screw it. But is he really “obese,” or is he just BIG? I tend to think the latter. He was big even as the 12-week-old kitten he was when I got him — twice the size of most cats his age, already with an adult-sounding meow and purr. I asked the vet then, “Are you SURE he’s only 3 months old?” The vet answered, “Yes, we go by the teeth.”

In his shaved state, you can see that he has a belly, but personally, I think he’d have trouble cleaning himself even without it. As the groomer put it, “He doesn’t have a lot of loose skin.” Of course, the last vet he saw slapped the O-tag on him (and on his baby brother Zevon, who is also 20 pounds and built like an oil tanker with fur) — vets, I suppose, have a “standard” for what a cat is supposed to weigh, and it’s not even as sophisticated as human BMI, length and height isn’t even taken into consideration. I got a big lecture about giving them the diet food so they won’t get the DIABEEEETUS, but you know what? Fuck that noise. They’re cats. They’re supposed to have a diet of mostly meat — as the holistic vet who treated my third cat, Pendo, for his cardiomyopathy put it, “Cats should be eating mice, not rice” — and those diet foods are just pure filler. I find it hard to believe that these foods are DIABEEEETUS preventatives for our feline friends, sorry. (And I want it noted that Pendo is the smallest of the three — he weighs about two-thirds what his brothers do — and has the biggest health issues.)

Anyway, Binkley would probably have an easier time cleaning himself if he WAS mostly fat. You wanna see a picture of a truly FAT (irresistible) cat? Here she is. 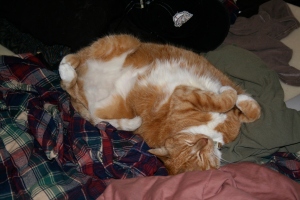 That’s Summertime, XH’s and my cat by way of my late MIL (now living with XH). Don’t you just want to dive in? And she’s CLEAN AS A WHISTLE. Even between her legs. I miss her and her Garfield beanbagness. (And as an added bonus, she loves LASAGNA! No, you really can’t make this shit up.)

No sooner did I put one douchenozzle to bed yesterday, when another appeared brandishing his own long, skinny, useless plastic white dick. Mo over at Big Fat Deal has the scoop; some idjit galoot named John Ridley over at the Huffington Post apparently posted his own steaming pile about how it was “insulting” to claim that fatness was a civil rights issue because we can easily control how many Big Macs we shove in our pie-holes. Yes, those very words, “Big Macs,” “shove,” and “pie-hole.” B8, I30, N47…BINGO. And no, he’s not getting any link love either. Fuck him. Click on this ick via Mo, if you just can’t resist; at least then she’ll get some traffic too. END_OF_DOCUMENT_TOKEN_TO_BE_REPLACED

The Temperance Union Lives, Only Now It’s Obsessed With Fat

Second update/erratum: It has come to my attention that the boats in It’s a Small World actually date from the 1964-65 World’s Fair, not from Disneyland’s opening in 1955. Please see addendum later in the post.

Dude, I am so not giving Newuniversity.org and that hideous, disgusting article by Kevin Pease, “a third-year psychology and social behavior major” about what a senseless tragedy it is that Disneyland is making the seats bigger in It’s a Small Seat — er, World — any link love. So lemme instead direct you to the most excellent takedowns by Paul at Big Fat Blog and Lindsay at BABble, and if you must click from there, go for it. But I don’t recommend it if you’re eating. I mean, eating anything ever. Because you’re not ever supposed to, fatass, Kevin says so, and he’s gonna be a hotshot shrink in a few years, which automatically makes him the rightest. END_OF_DOCUMENT_TOKEN_TO_BE_REPLACED

Five Minutes with the Next President

I want to thank everyone who responded to my post of one week ago about how to handle it as a blogger when Barack Obama makes fatphobic remarks to African-American audiences. Many of you had excellent points and made excellent suggestions, and I am very grateful. I knew you guys were supersmart! END_OF_DOCUMENT_TOKEN_TO_BE_REPLACED